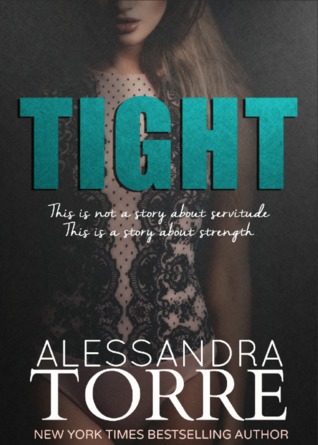 *~* SYNOPSIS *~*
﻿
I was happy in my small town. In my life as a single, thirty-two year old woman. I had a good job, wonderful friends, my independence.

I also hadn't got laid in three years. Hadn't been on a date in two. Had stopped counting calories and wearing makeup... a while ago.

Then Brett Jacobs waltzed in. Caressed my thigh, dug rough fingers into my hair, lowered his soft mouth to my skin, took sexual control of my mind and stirred it all around with what he packed in his pants. He flipped my quiet life upside down and crawled into a place in my heart I thought was dead.

The issue is his secret.
The issue is her.
The issue is that I don't even know she exists, and he thinks she's dead.
The issue is that shit is about to hit the fan and I can't hold on to him tight enough.
*~* REVIEW *~*
If you think you know, you SO don't know.  You think you know Alessandra Torre's style, you've read all of her novels, her series, her mini series.  You think, Oh yeah, I know her genre.  I know her smoking hot sex scenes.  I know all about her alpha males, that mostly all begin with the letter "B".   Well, if you are like me, then you are completely wrong.
I didn't know anything about Tight.  I knew it began as a novella in an anthology and the name of it was, Still.  I had it sitting on my Kindle, waiting for me, but alas, life happened and I didn't get to it right away.  Shortly after this anthology came out, it was banned!  Gasp!  I love anything that could make people freak out and get all up in arms about nothing, so it was exciting to me.  So Alessandra made the announcement that she would make Still into a full length novel called Tight.  Knowing this and my obsessiveness and impatience, I decided not to read Still and wait for Tight! It killed me because anything from Ms. Torre does not go un-read, but I waited.
Tight is the story of Riley and Brett.  It starts as a whirlwind, love at first sight type of story.  At first I thought, ok, this is fine, a little insta-love, hot rich guy, sweet southern girl...I've heard of this before.  But then I kept going and going and soon I couldn't put it down.  There are chapters interspersed through their story that make your brain go all haywire.  I kept trying to piece things together.  To place the blame on someone.  I was at a loss.  Then once it all made sense, I was in a rush to see how things ended.  The subject matter might be a little intense for some.  Read it with an open mind and know that these horrible situations do exist.  It made me think of national headlines, stories where women go missing.  It was heartbreaking at times and terrifying at times.  I still can't get over the teeth incident.  (that's all I'm giving up there, but I'm going to have to have a convo with Alessandra regarding this!)  But what it came down to was that Riley is a smart and tough woman that could hold her own.  I adore Brett! Brett is the ultimate caretaker and knight in shining armor. I wish we got a deeper look into these two.  I also would love a sequel to this.
I would like to thank Alessandra for keeping us guessing!  Not staying the same, ever!  Never afraid to change things up.  This is why I love her novel so much.  They are never repeats and never disappoint.  Congrats on stepping outside of the box!
xo, D
*~* BUY IT *~*
Amazon | Barnes and Noble | Kobo | iTunes
*~* About the Author *~*

From her home near the warm waters of the Emerald Coast in Florida, she devotes several hours each day to various writing projects and interacting with her fans on Facebook, Twitter and Pinterest. Happily married and with one son, she loves watching SEC football games, horseback riding, reading and watching movies.

Torre has four books slated for release in 2015. To stay informed, consider subscribing to her popular monthly newsletter!