Blog Tour and Review: Strip Me Bare by Marissa Carmel 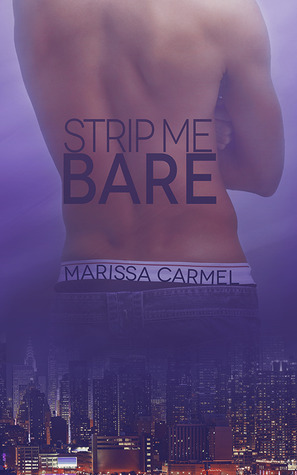 *SYNOPSIS*
“I may have had more lovers than you, and I may take my clothes off for countless women, but you are the only one who can strip me bare.
”Do you ever stop loving someone just because they’re gone? Five years ago Ryan Pierce disappeared from Alana Remington’s life without leaving so much as a post-it note behind. He was the one she gave her heart to, her soul to, and her virginity to.  So imagine her surprise when she finds him dancing at one of NYC’s hottest male revues as Jack the Stripper.
Ryan never stopped loving Alana, and now that she serendipitously dropped back into his life, he’s vowed never to lose her again.  But being together has its costs, and challenges Alana isn’t sure she can handle.
She finally has Ryan back; but how in the world is she supposed to share the love of her life with half of the women in New York City?
*REVIEW*


Strip Me Bare is a fantastic book!  There are so many things I loved about it.  First of all, I couldn't put it down.  The characters were well developed and likeable.  I loved the dose of fashion that we got in most scenes.  But most of all, I loved the story.  It started out good but kept building and building and was so satisfying.

"On the outside I was- still am, actually-the good girl, the polite girl, the girl who doesn't break any rules, but on the inside I'm restless."

Alana is a priveleged, smart and sassy girl who abruptly lost her first true love with no explanation.  In a hilarious twist of fate, their paths cross many years later and in the most random of places...a strip club.  Alana and Ryan have much to hash out and obstacles to cross.  So many things are in their way, socioeconomic status, family, Ryan's job, their issues of trust and bottled up emotion.  It was beautiful watching them break each one down and fight for what they wanted most, love.

And talk about fighting!  Alana is the biggest fighter of them all.  She was fantastic and strong in every way.  Keeping up appearances for her tough father got her to where she wanted to be and standing up to him when it mattered most gave me so much respect for her.  I loved her the best out of all the characters.

"Two people one in the same, both living a double life to get what they want; a future and each other."
They way things ultimately turned out for them made my heart happy.  I would love to see this story as a movie, I think it would be fantastic.  Especially with a bit of the "Magic Mike" aspect!  I'm definitely going to check out more books by Melissa Carmel!  There will also be a pre-quel for this book coming out soon, Stripped From You.


*ABOUT THE AUTHOR*
Marissa Carmel has loved writing ever since a young age. She has a duel degree in History and Political Science, but took as many creative writing classes in college as she could. She spent most of her twenties bartending, which is where she met her husband and a multitude of interesting people. When she’s not reading or writing, she’s hanging out with her family, experimenting in her kitchen or doing yoga on the living room floor.
*STALK HER*
Goodreads | Twitter | Facebook | Website
*BUY IT*
Amazon | Amazon UK
*PLAYLIST*
Muse- Madness
Run- Leona Lewis
I Know You Want Me- Pitbull
Troublemaker- Olly Murs feat. Flo Rida
What You Wanted- OneRepublic
(I Just) Died in You Arms Tonight (Club Remix)- Cutting Crew
Counting Stars- OneRepublic
﻿
Posted by Unknown at 5:30 AM