Club life is all about money, fast bikes and faster women. Most importantly though is brotherhood. Trey Lennon knows he had it as a Demon's Bastard but now he is a Lucifer's Saint, his life seems like he's starting all over again.

Then she comes along.

The daughter of Jonesy Hughes, the President of the Demon's Bastards. The one woman Trey couldn't have as Demon's Bastard and the last person he should be attracted to as a Lucifer's Saints club member.

The two clubs have kept the peace between each other for a long time but Carlito Navarro has other plans. He is intent on destroying the cozy situation between the clubs to make way for Aztecas Infierno, the MC and cartel who has his lifelong allegiance. Now he's found the club's weak link, he's going to use it.

And burn it all to the ground. 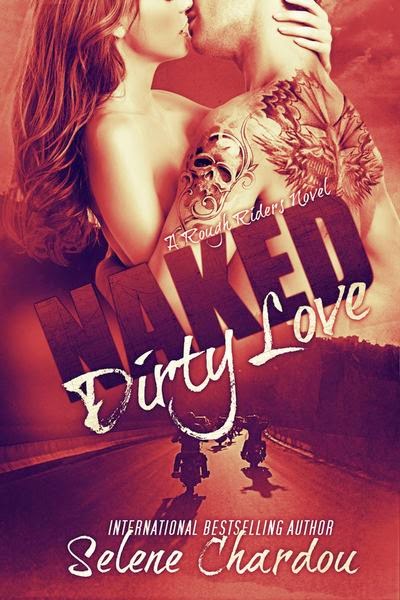 Trey’s private quarters were clean and orderly to the point of obsession. His bed was made with classic military precision and there weren’t any clothes or shoes thrown about the room. He simply had a king-sized bed, fancy desk with a comfortable leather office chair, and a fifteen-inch MacBook Pro. I turned around and also viewed an oak drawer set with a thirty-six inch flat screen television, Blu-ray player, and speakers to amp the sound.

“Why don’t you sit on the bed and tell me what this is about?” he demanded loudly, snapping me out of my thoughts.

I’d judged this man all wrong. From the way he worked on motorcycles to his brilliance as a computer hacker, I assumed he’d be like most men I’d known my whole life. Grown up boys who were dirty, bathed when they remembered to, and weren’t great with housekeeping. This guy was the complete opposite - it made him an utter enigma.

I cleared my throat as I sat down on his perfect bed. I felt bad about rumpling the down comforter but he didn’t seem to mind as he sat next to me, completely calm and quiet. He crossed his arms against firm pecs that were clearly visible through his tight, white t-shirt. His stance, obviously defensive, almost hostile, bothered me more than I cared to admit.

Why was he being so dismissive toward me? Had I done something wrong? I’d always assumed we were friendly, and although he was part of the Saints MC, I didn’t resent him for leaving the Bastards. I assumed it was something personal and never asked my father about it; not that he would have told me anyway. He’d have merely grunted, “Club business—nothing for you to worry your pretty little head about.”

As if I wasn’t an attorney who served both clubs—just like my partner—and like we were civvies, completely unaware with what the clubs were doing. Hell, we’d use the law firm as a money-laundering front, setting up accounts everywhere from Switzerland to the Cayman Islands for the clubs, the Mafia, and the cartel. They certainly weren’t sending clean money to any of those places when large-scale transfers were involved.

I felt like we were still looked upon as children or old ladies—nothing was our business until someone got into legal trouble and then it was our business to get them out of it. The contradictory sons of bitches were all alike. Women weren’t good for anything but screwing and having babies until they really needed us; then we were supposed to go above and beyond the call of duty to make them happy.

“I know Killer told us to take all the time we needed but seriously, I gotta get back to work and if we take too much time, everyone’ll assume we’re fuckin’ so can we move this show along?” Trey questioned, his voice softening.

I glared at him with cold eyes. “And why would it be so bad for everyone to assume we were fuckin’? Am I not good enough for you, Trey Lennon?”

He smirked, shaking his head. “That don’t have nothin’ to do with it, Kyra. You’re Jonesy’s daughter and you know the rules. You were forbidden when I was in the Demon’s Bastards MC. Now that I’m a part of the Lucifer’s Saints MC, you think your father is gonna be hunky-dory with his daughter and me bein’ somethin’ other than acquaintances?”

“Well, he didn’t say much when Cricket and I had a thing goin’ on—”

“Jonesy didn’t say nothin’ ’cause he knew it wouldn’t last. That’s not the same as you and me. We always had something between us but neither of us ever wanted to pursue it and, baby, if I did pursue something with you, it’d be for keeps. I’m not gonna romance ya or fuck ya and lie about how you don’t mean nothin’ to me because you would.” 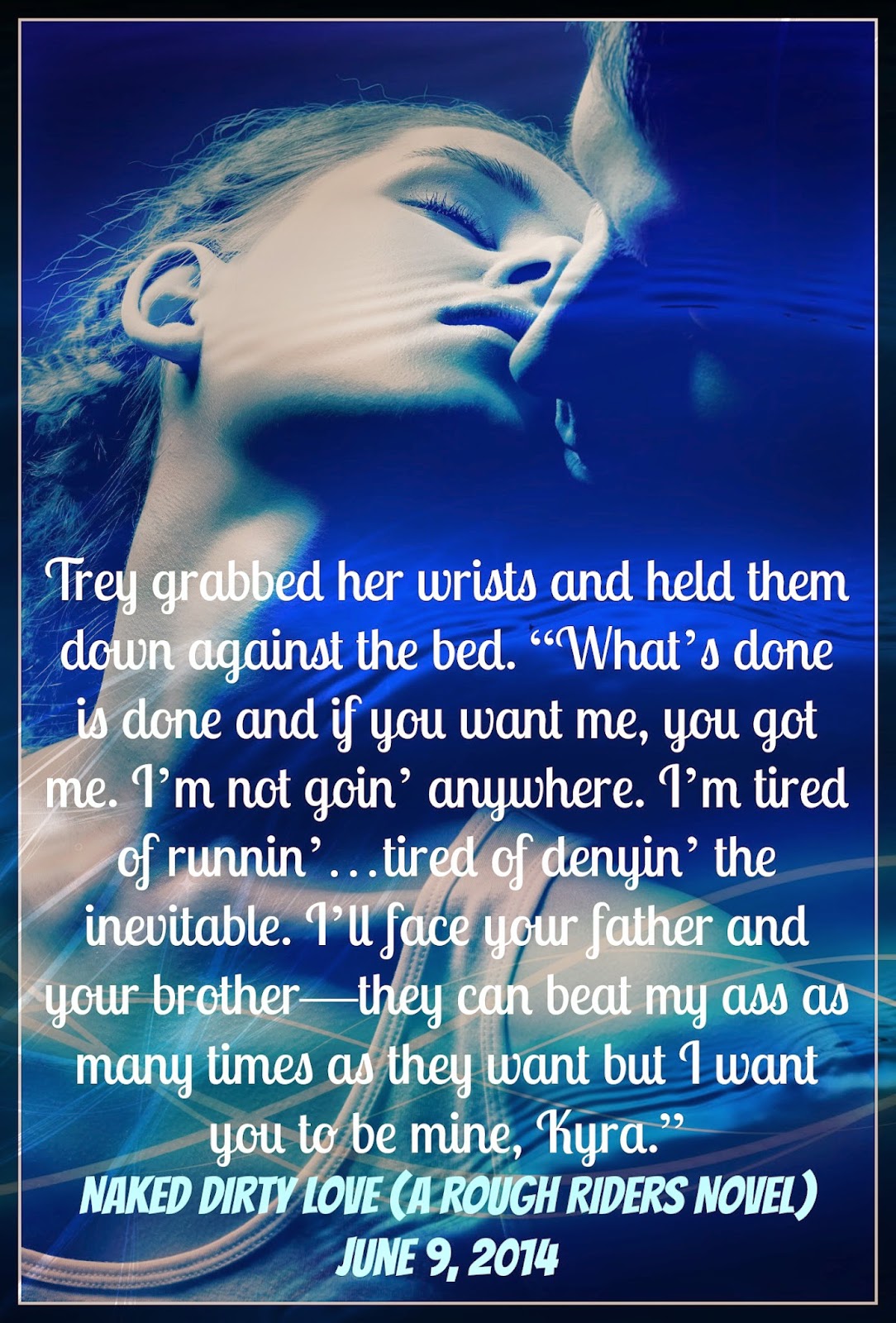 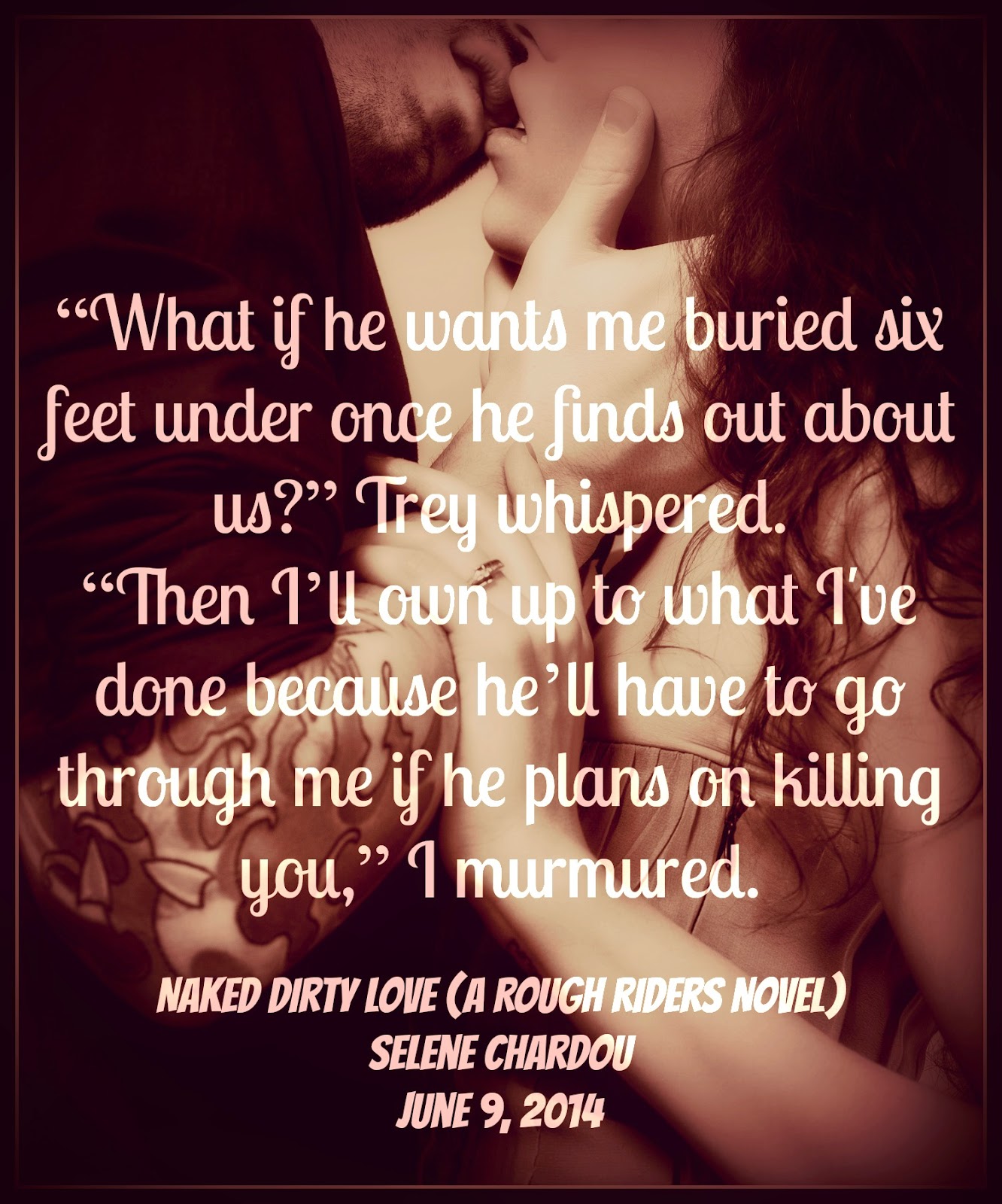 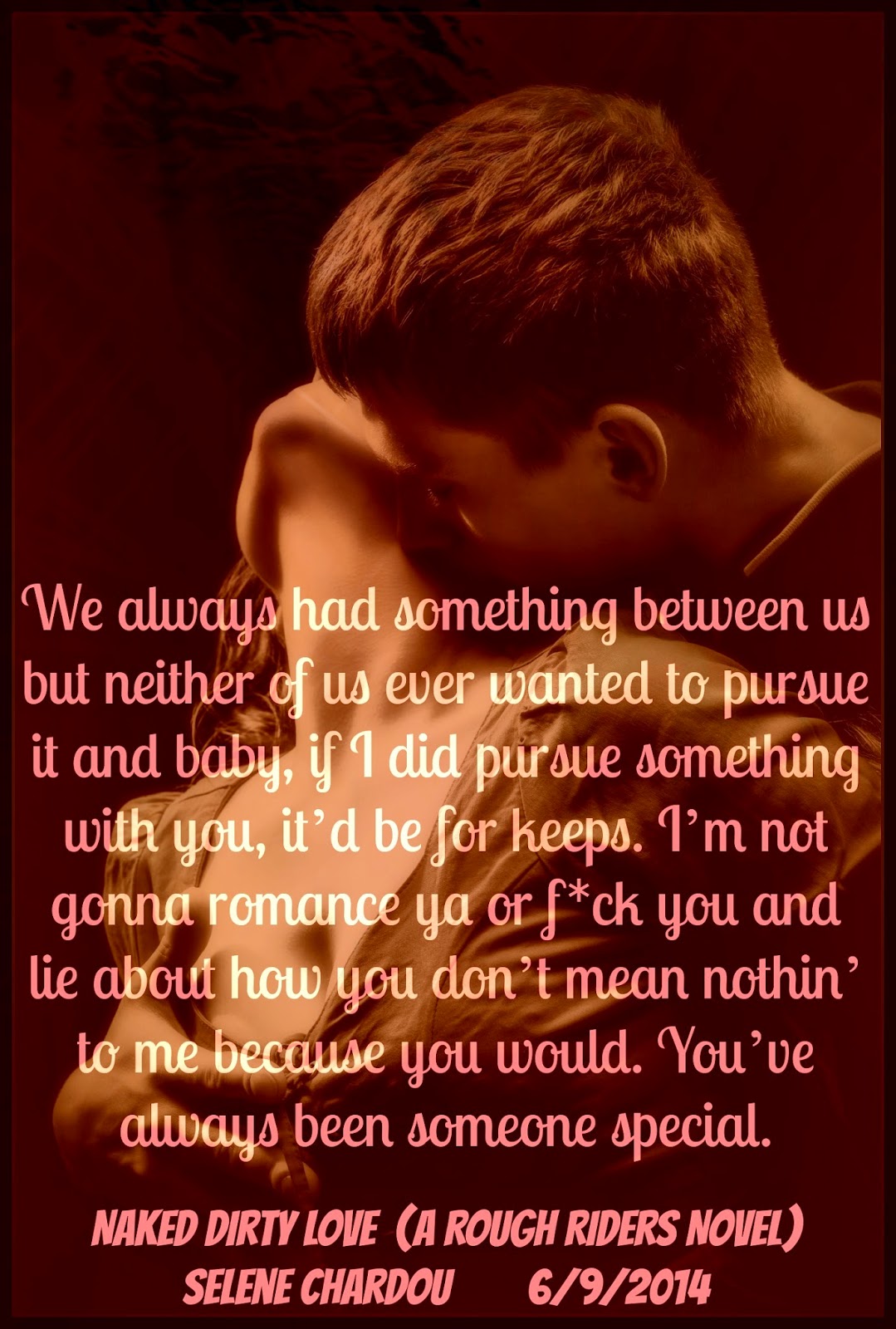 Cillian strode over and knelt near him. He sat up and looked at his brother without acknowledging anything, wrong or not.

“Everything taken care of?” he asked, genuinely concerned. “Whatever Kyra needed to talk to you about seemed serious. You don’t have to share everything with us; as long as it doesn’t affect the club it’s your business, brother.”

“Yeah, it’s good. I overreacted… sorry about that.” Trey paused and looked away. “I didn’t know what she wanted. If it had anything to do with Jonesy and the Bastards, I couldn’t deal with it, not today—not right now.”

“That’s obvious, brother. Doesn’t look like you can concentrate on much of anything at the moment - not that anyone blames you. Was she able to shed any light on…the body?”

Trey winced at Cillian’s careful words. Yeah, the body. Unfortunately, Keri was nothing but a rotting corpse interred at Black Oak Cemetery.

He nodded, purposely choosing to be non-committal. “I know where she is. Her dad had her shipped back here and buried in the Decker family plot. I want to go see her but I don’t know—I’m not sure I’m ready for that yet.”

His brother patted him firmly on the back. “You’re one of the strongest people I know. You lost your parents and your brother… then you lost Keri. I suggest you go see her one last time, even if only to yell in frustration. You need to go through the process, Trey. No one expects you to be Mr. Perfect, least of all me.”

Trey sighed and raked a hand through his hair. “You’re right, as always. I guess I should take off early, shower, and go see her before the weather gets any worse.”

Cillian smirked. “We’re expecting a snow storm tonight, brother. I’d suggest you leave as soon as possible.” He walked back into the garage bay while Trey turned around and headed back into the clubhouse.

In record timing, he’d showered, shaved, and slid on a pair of slightly baggy jeans, a long black and red flannel shirt before sliding his cut over the ensemble. It was dangerous to ride out to Black Oak looking the way he did, but he simply didn’t have a single fuck to give at this point.

He needed to say goodbye to Keri, once and for all.

Trey drove the Escalade to the impoverished town and directly to the cemetery. It was miraculously well kept compared to the rundown section of the Tri-Towns area. He could only guess the reason there weren’t incidents of grave robbery was because most of the meth-addicts were too afraid to cross the White Knights.

The Decker Family Plot took up a nice size of real estate in the cemetery. It wasn’t a secret the Knights had lost more than their fair share of members over the years though Nel, his brother, Brad, and a couple cousins who were part of the WK Originals were still in good health and free from harm.

Hell, Brooklyn should’ve been in one of the plots but he was safe and sound, though keeping a relatively low profile.

Trey stepped out of his SUV, locked the door behind him, and stuffed a nine-millimeter Beretta in the band of his jeans, pulling down the flannel shirt and his cut to hide it. If trouble did find him, he was prepared, a full clip in his back pocket just in case.

His pulse raced like he’d just finished ten miles on the treadmill, his stomach a mess of aches and somersaults as he finally located Keri’s grave. Her plot was clean, free of debris with a massive headstone. There was a photo of her in between her full name—Kerri Anne Nielsen Decker—and the dates of both her birth and death.

She smiled at him beguilingly, her blue eyes shining bright while her small features and natural blonde hair complimented a light summer tan. The photo was beautiful and he’d remembered the year it’d been taken.

The whole situation was all too much and the tumult of emotions that began to take over his body overwhelmed him. He knew he’d be affected but the out-of-body experience he felt went beyond the need to howl and scream. He needed to cry, to sob, and actually absorb her grisly death. She’d meant so much to him and she deserved to know, even now when she couldn’t possibly respond to his actions.

Trey sank to his knees, the impact lessened only by dying grass. He didn’t feel discomfort, only his emotions betraying him as tears fell from his eyes. He sobbed quietly, his hands covering his face. “I’m sorry, baby,” he whispered in a hoarse voice, wiping falling tears from his cheeks. “It’s my fault you’re gone. I should’ve left you here but I didn’t want to be away from you. I hope wherever you are, you’re makin’ angels smile and someone laugh. I never deserved you, babe.” 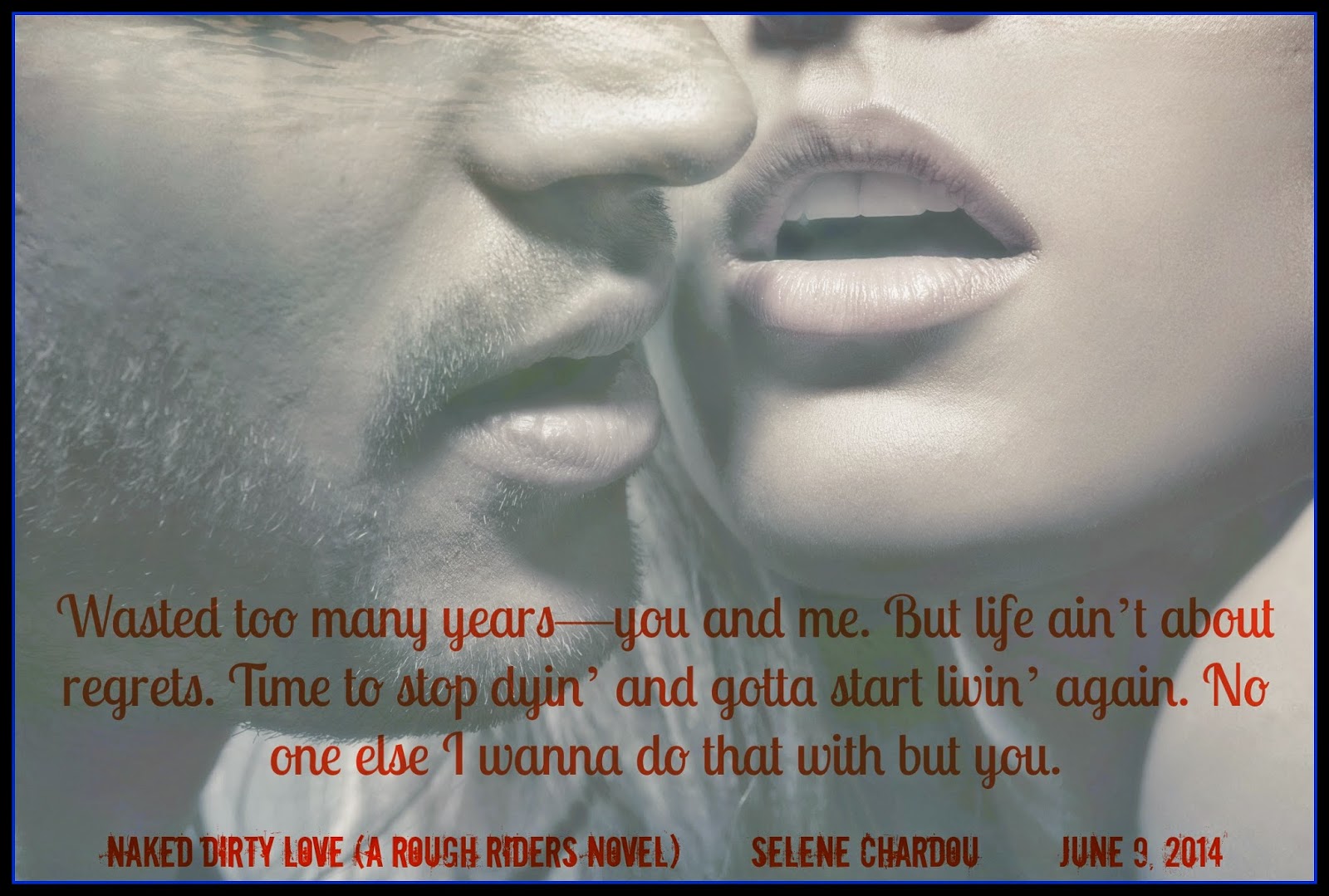 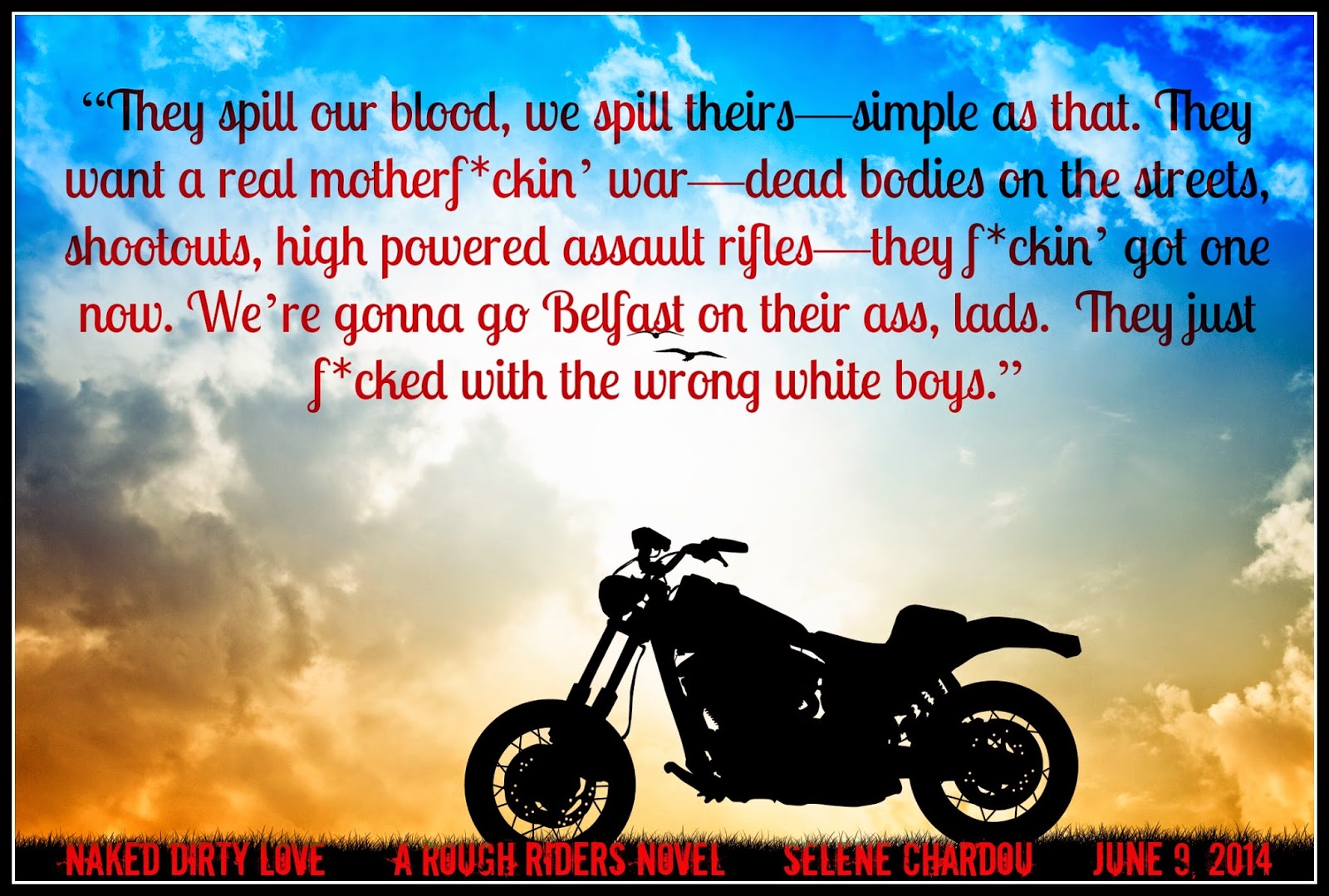 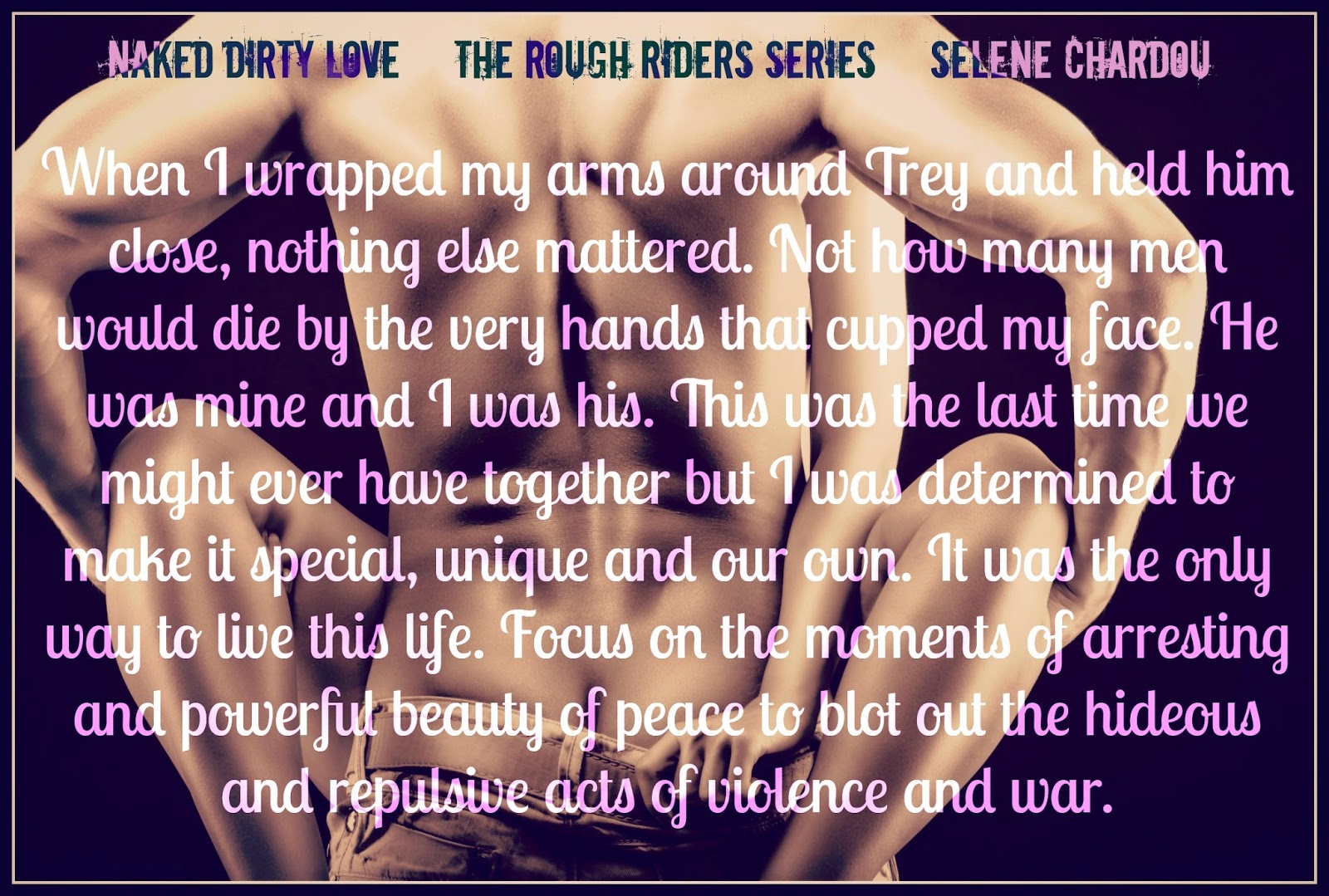 Selene Chardou is the alter ego of Elle Chardou, and a professional liar.

When she isn’t busy writing about hot, exciting times with the wild, damaged, out of control set in the world of Contemporary Romance and Romantic Suspense, she’s planning her next trip to France.

She is currently working on a vast array of books about good girls gone bad, bikers, gangsters, rockers, fighters, lovers, tattooed alphas, strong women and anyone else she finds remotely interesting. When not glued to her laptop, she enjoys daydreaming about her next great idea, visiting friends, traveling to her favorite locales in the world, jet-setting across the country to author signings, and playing taxi driver to her school-age daughters. 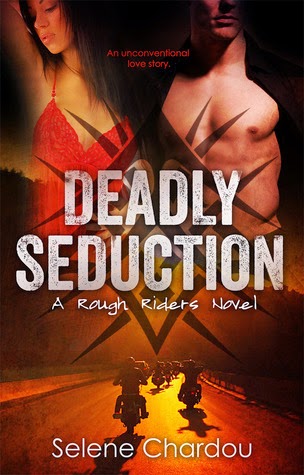