BLOG TOUR and Excerpt: Lost In Distraction by BJ Harvey "In the three years after a horrible crime claimed her family, Elise Halliwell has been alone, shut off from the world in a self-imposed emotional exile. She goes through the motions, finishes high school and moves across country to start college and begin the next step in her pre-destined life.

But her exile is dramatically cut short by the entrance of a dark haired, blue-eyed, smirking man who shakes her to the core, achieving what everyone else before him has failed to do, he makes her feel again.

As much as he wishes it were different, fate has not brought Braxton James into Elise’s life, or has it. Brax has to keep her safe from people in her life who have ulterior motives and may want to hurt her.

Elise has no idea the threat she faces, and Brax wants to make sure it stays that way. But as Brax struggles with getting close to her, he begins to live a lie. Unable to resist the pull that is Elise’s bright green eyes, infectious giggle, and loving heart, he finds it impossible to stay away, so the double life of being Elise’s boyfriend and keeping her safe begins.

Full of twists and turns, danger and revelations that no-one could predict, you won’t be the only one lost in distraction." 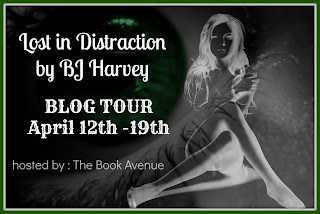 Elise
I wake up on top of Brax, still laying on the couch. The television is blaring music in the background and I’m not sure what the time is, but the light streaming through the gap in my blinds is telling me it is definitely morning. I try to get off Brax, but I feel his arm tighten around me. I look over and see his bright blue eyes staring back at me. How can someone wake up and look this sexy? We lie there, just staring at each other and I’m not sure what to do. I’ve just spent my first night ever sleeping in a man’s arms.

My mind is focused on the feeling of Brax’s hard body underneath me. He feels good, way too good. I wonder how he feels with me laying on top of him. I try to move again and he tightens his arm even more, that smirk of his larger than life.
“Where do you think you’re going?” he says, his voice deep and husky from waking up, making my insides clench. Damn, that is sexy.
“I thought you might be uncomfortable,” I try to explain, losing my train of thought as I stare at his mouth. His lips beg to be kissed but I’ve never been one to initiate things. His eyes are all-knowing, like he can hear my inner monologue.
His grin slowly disappears as his gaze shifts to my mouth. Deciding to take charge for once, I lean down to gently nip his bottom lip as he opens his mouth to let me in. My fingers take on a mind of their own as they run through his bed hair, pulling his head closer to mine. It feels so natural to be waking up to him, to kiss him. Is this what love is supposed to be like? Am I in love with Brax? I can’t deny that I’m falling for him, and his kisses are the perfect antidote for any bad nightmare.

We pull our mouths apart, breathless and full of desire. I giggle and he quirks his eyebrow at me.
“Is kissing me funny?” he asks, grinning at my laughter.
“I just figure I’d have morning breath, I’m so sorry,” I say between laughs. He pulls me down to him again and kisses me deeply, plunging my mouth with his tongue. He pulls away so our lips are barely touching,
“I don’t care,” he whispers as his hands roam down my shoulders, around my waist and slowly inch down to my ass as he pulls me even closer to him. I gasp when I feel how much he wants me, he feels divine. I make myself pull away because if know if I don’t I won’t be able to control myself, and I’m not quite ready for that kind of interaction. Leaning my forehead against his, I try to calm my racing heartbeat. It feels like it is going to beat out of my chest.
“That’s to prove how delicious your morning breath is, babe.”
He kisses my nose and lifts his shoulders up, propping himself up onto his elbows and giving me the opportunity to roll off the couch.
“Now, where is my coffee? I need a reward for being your knight in shining armor.”

*~* PLAYLIST for Lost In Distraction *~*

*~* BUY IT! *~*
Amazon
Barnes and Noble
a Rafflecopter giveaway
Posted by Unknown at 7:16 AM