REVIEW: When We Collide by A.L. Jackson 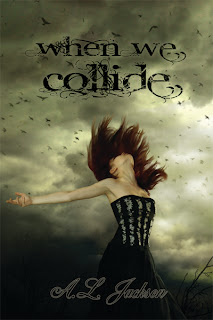 "William has spent six years running from his past and the last eight months trying to rid his mind of the dreams that increasingly haunt his nights.
Maggie had lived her entire life without hope until one man showed her what it meant to be loved. He'd been her light in a lifetime of darkness. Six years ago, that darkness stole him away. Without him, she's surrendered herself to an existence she doesn't know how to escape.
In a moment that will change his life forever, William comes face to face with the girl who, with one look, captured his heart.
Now William is ready to fight to take back what had been stolen from him six years before.
But he never imagined what that fight might cost him."


Wow. I think one quote from this book that can truly capture the essence of this book was from William, "It was everything that I wanted her to know, that it shouldn't hurt to be touched, that it was ok to be adored."
I really liked this book! If you are looking for light and flirty, this isn't it. If you are looking for a book that you will get emotional about, this is it. It's a story about first loves, impulsive choices, forgiveness, and redemption. These characters do not have it easy, for sure. There are very real obstacles they have to overcome that could very well prove to be too much.

There were times when I was so frustrated with Maggie and the choices she made. It is so easy to get angry at her when you were reading William's POV because he was offering her a perfect way out. Then you would read the situation from Maggie's POV and the anger slipped because whether you agreed or disagreed with what she was doing, you understood WHY. I felt that hearing Maggie's POV was enlightening as to how other abuse victims think. It was real. It was heartbreaking. And it was so filled with emotion that you couldn't help wanting to save her.

William. Oh William. Sometimes he made me SO ANGRY because I just wanted him to rush in there and save the day. Other times, you could feel his pain about how he had to handle things. When he's returned to town and is following them around was kind of odd to me initially, but hearing WHY he did it really changed my opinion. He was such a good guy. You could feel how much he loved Maggie and Jonathan. His family was amazing. They didn't let him get away with non-sense, but they loved unconditionally.

There were parts at the end that I was REALLY glad I was reading while at work and had to keep my emotions in check. I would've been a blubbering mess. The whole book was amazing, but the end was PHENOMENAL. The story comes full circle in a beautiful way.

Abuse is no joke and A.L. Jackson did an amazing job portraying how it impacts the abused and everyone around them. She also did a good job touching on the mental instability of the abuser without ever justifying their actions. Thank you for bringing awareness to such a serious topic.

For other books by A.L. Jackson - check out Pulled and Take This Regret. You will not be disappointed!